Hi everyone! Sorry I’ve been so MIA. I’ve been feeling ill for the past few weeks but luckily managed to make it out to the Rittenhouse Fine Art Show last weekend.

If you ‘like’ my Facebook page, then you’re probably reading this to find out more details about this lovely photo:

So here’s the story!

It took A LOT of strength to go to Rittenhouse, but I knew I had to do whatever I could to feel better. The show felt like a homecoming sort of event for me. I’ve been on the road for so long that it was nice to be back home. Even with being sick, it was so comforting to be in Philly. The people are lovely out west and down south, but boy did I miss the city life and sarcasm of the east coast!

As people wandered the show, I could hear them talk about how hot it was that weekend. I guess being away, I’ve developed some kind of heightened warmth! (And hey, I’m not complaining.) I didn’t see one dog in a stroller or a Hawaiian-themed shirt. It’s a little weird being back home. I don’t think it really hits until I run into a familiar face. Then it just feels like I never left!

So I’m minding my own business and I see a suspicious looking man. The security notices his behavior too and start following him when naturally, he starts running. Where else would this man run and get cornered but booth 25, the tent of yours truly! It took about half an hour for security to hold him down! I ran out of there immediately of course and watched carefully after my art work. Thank goodness I have a sturdy tent!

I learned that the man had been stealing cell phones from people walking on the street. His move was to run up to people and snatch their phones as their guards were down. You may tell others you know what you’re doing, but please take a second to actually think about your actions on these city streets people! Use your best judgement to stay safe and be alert. If something like this happens to you, the thief better not be pinned down in my booth again!

I’m glad he was caught and yes, everyone I am OK! My art is safe as well and I’ve been getting a lot of great feedback on my new work. Keep it coming and keep your eyes out for more drawings. I am currently on my way to Pittsburgh for the Three Rivers Arts Festival this weekend. Hope to see you there!

2 thoughts on “Expect the Unexpected” 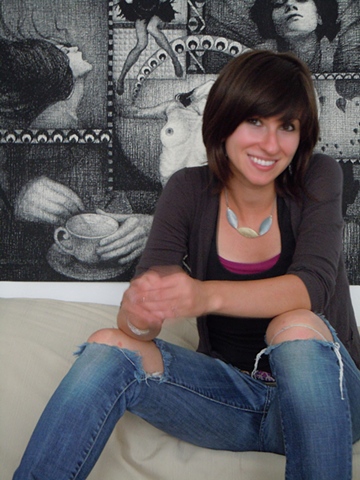